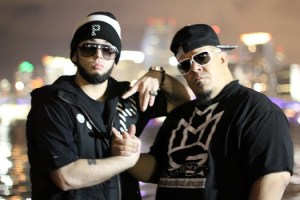 One of the hottest up-and-coming rappers on the mixtape level is AG Cubano. For years, he has been releasing mixtapes. A native of Northern California, AG Cubano moved to Miami when he was signed to Maybach Music Latino. Before the release of Teflon Don, Rick Ross announced he had more branches of Maybach Music coming.

AG Cubano recently discussed his new mixtape and how he ended up on Maybach Music Latino with Hip Hop Vibe.

When do you intend to release Power Trip? The project is done, the goal was to get it out in the first quarter. The music is done and the video is done. The singles and videos will be released before the end of the first quarter, but the official project will drop early in the second quarter.

You are originally from the West Coast? Yes, I was born and raised in the Bay Area. I’m from the 650, I grew up near Palo Alto.

Can you name some of the Bay Area legends who inspired you? Tupac, E-40, and Too $hort, but there are other artists, to me, who are legends, Mac Dre, theÂ Mob Figaz have inspired me a lot, C-Bo, Yukmouth, The Hoodstarz (who are from my area). They are all still going strong, too. I am a rap fan, in general, so I have been inspired by all types of hip hop genres and locations.

Now, you live in Miami? Yeah. I’ve been out here for seven months. I moved out here when I signed with Maybach Music Latino. They checked me out and then they signed me and I came to Miami to visit and then I ended up staying for good.

How have you enjoyed being a part of the overall Maybach Music movement? It is something that has completely taken my career to another level. It is different from me being in the Bay Area, because I live where the label is based at. The team, and their network, is so strong. Being so official is a huge advantage. Everything is in Miami, which has raised the stakes for me. Not to mention, Maybach Music is the hottest label in the game.

What is your relationship like with BaRock Urbano? Man, he is like my big brother. We have a family relationship, I have been rocking with him every single day since I came to Miami. While I was getting my own place in Miami, he allowed me to live with him and we really bonded. When you do this, you realize who you can work with or not. Working with him has made me a better rapper, as he has stepped in to mentor me. I did everything for myself in the Bay Area and now I have a legend in the game helping me out. My relationship with him has gotten stronger, as we are more like family now. This relationship makes the music better and I really look up to him.