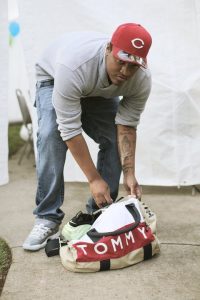 Yung Slide has been carefully crafing his debut album, which he calls The Potential. The young rapper has made great strides, while working on this album. Among the people working with him on the album include Billionaire Boyscout, of “Choppa Choppa Down” fame. Working alongside hitmakers has not taken Yung Slide’s focus away from his own goals.

It is fantastic to have connections, as an up-and-coming artist, but it is much better to be the connection. Needless to say, Yung Slide aspires to become the connection. Yung Slide has been working on his craft for some time. Recently, he took time out of his schedule to speak on his debut album and being a part of the Young Riot Squad.

When The Potential drops, do you believe it will be considered a classic album? That is not up to me to decide. But, I would hope it would be regarded as a classic after all the time I have put in on it. I feel the album is set, after recording several versions of this album. I would hate for the people to throw it to the side when it is done.

How much time have you put into the album? The album was initially intended to be a mixtape, but we decided to change it into an album. I have spent well over a year working on this project, being patient, taking my time, and choosing the right production.

So, you have Billionaire Boyscout not only producing for the album, but also co-managing you? Yeah. That’s my man. He’s like my big brother, he has the business mind. We met and clicked.

How did all that come about? A year ago, I dropped a video called “Black Thoughts.” I had first met Boyscout and I flew out to Los Angeles. I used to buy beats from Boyscout, we were not cool at first. I felt I had to prove myself to him. During my time in Los Angeles, we bonded. Once he heard my lyrics over a few of his beats, he contacted me and said he wanted to executive produce my album. A couple months ago, he also began managing me, as he already had a say in what I was doing, since then, we’ve really been going at it.

What led you to working with the Young Riot Squad? I was one of the original members. A year after the crew was formed, I joined. Young Stack was already a member and I went through the process and joined the crew. We became cool with each other, we did songs together, and we still have songs in the works. I was one of the first artists to join and soon I met more people and we decided to spread it. But, being in New York City led to it and now we are planning on releasing some Young Riot mixtapes, because there are a lot more people to be introduced. My love for the late Stack Bundlez is what led me to them.

Following your album, what do you have planned? There are a lot of things in the works. I am preparing to do webisodes, I have a mixtape coming, and then I plan to release a documentary, followed by a movie. The movie is based off my song, “True Love Story.” I also have a song on the Young Riot mixtape and my next album is also in the works. It is constant work, I have several shows coming up, but I had backburnered shows to work on my album.

What do you forsee in the future for yourself? Honestly, my goals are to become the greatest. If I do not become the greatest, I want to be one of the greatest. I want to be remembered as an icon, I see my music going far. My projects with Billionaire Boyscout are not being done by anyone else. Everything on the album is crazy, and this is my first album, and it is being done independently. It’s all up to God in the end, so I keep a humble mindstate, but my goals include taking the game over.