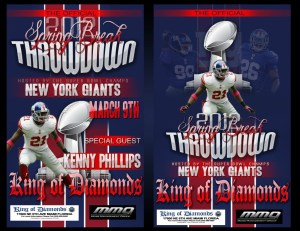 Miami is one of the top vacation destinations in the world. Whether it be spring, summer, of winter, people hope to make it to Miami to enjoy the weather. Along with the enjoyable weather, there are a number of parties to go to. While other places in the United States are suffering through winter, Miami is having summer-like weather, making many want to go there to celebrate spring break.

The defending Super Bowl champion, New York Giants, are no different. Moss Management Group has put together The Official Red & Blue Super Bowl Party at the famous King of Diamonds. Special guests will include Kenny Phillips, along with many other celebrities who will be in attendance. On March 9, 2012, the event will take place.

Leading up to their Super Bowl victory, the New York Giants made several appearances in the media, discussing their run. Throughout the NFL Playoffs, the team was considered underdogs. As the anthem for their Super Bowl performance, French Montana remixed his “Shot Caller” single just for the Giants. In the end, the Giants won and they played his track.

Watch the promotional video below: