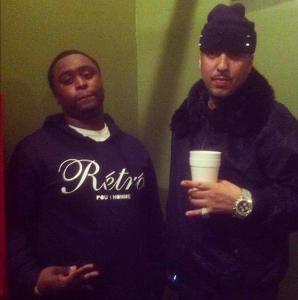 The man behind the “Choppa Choppa Down” beat was Billionaire Boyscout. After doing the production for French Montana’s hit, he was called upon for more services. As he has become one of the hottest new artists in the game, French Montana’s upcoming debut, Excuse My French, is highly anticipated.

Billionaire Boyscout will have several tracks produced on the upcoming album and also has other tracks in the works. Other artists Billionaire Boyscout have worked with include Rick Ross and Waka Flocka Flame. Once Excuse My French comes out, surely more work will come along for the popular rising producer.

You will be working with French Montana on Excuse My French? Yeah. I’m getting beats ready for that. He has me, Lex Luger, Harry Fraud, Play-N-Skillz. So, yeah, I’ll be contributing to Excuse My French.

You also produced French Montana’s breakout hit, “Choppa Choppa Down?” Right. It’s a very long story about how that beat got to him. In early 2010, my manager went to New York and met French. He played a couple beats and I had my manager play about thirty of my beats played. But, French Montana chose that beat, it was older than the rest of them, produced in 2008-2009, and he chose it in 2010.

Originally, the song was going to be on Cocaine Mafia, featuring Three Six Mafia. The remix came out, which featured them, was intended to be the original. When French Montana got the beat, he decided to put Waka Flocka Flame on it, and the song took off, even as a mixtape joint. From there, the track went on to become a hit.

How do you feel about French Montana’s buzz right now? Man, honestly, I’m proud of French. I have been a fan of him from the beginning, when he was with Max B. When I used to listen to him, no one in my hometown, Chicago, ever heard of him. Now, everyone is all over him. In Mexico, they have a version of MTV, and that network featured “Choppa Choppa Down” as one of the best singles of the year and it was not a hip hop station, as Lady Gaga got number one. But, he’s been putting in work, which is paying off and I’m proud of him.

Who else are you working with? Wow, right now, I’m working with Yung Slide. We’re 90% done with his debut album and I am working on Bleu DaVinci’s Gangsta Grillz mixtape. I have a track with Blue, Tony Yayo, Uncle Murda, and Maino. I am now a member of theÂ Toothpick Clique, working with Tris J. We’re working over here and I am also working with my artist, Tim Stacks. I have my hands in a lot of different pots, and of course I’m working with Sinatra. I am very excited about Tim Stacks’ new album, it will be a problem too.

I am also working with the heavy-metal band, Animal. That will surprise those who know me, because I am working on a full heavy-metal song. That will be coming out very soon, so be on the lookout for that. I am also doing work with A$AP Rocky, Rozay Richie, LEP Bogus Boys, Legend Mane.

Will you be appearing in any music videos? I will be very soon, I will be in some of Trish J’s upcoming music videos. Be on the lookout, you will see my face a couple of times. I realize I have to show my face to build more buzz, so the people will begin to see more of me soon.

How long have you been making beats? I started producing in late 2005. All my life, I have been doing music, but I began producing back in 2005.

Do you see yourself as one of the future legends in the game? That is not up to me, it is for the people to decide. I have to consistently make good music. Hopefully, that will lead to me being considered a legend.

In the future, do you see yourself as a record executive? Yes. Of course, I know about the record labels and how things go down. Record executives do not know what artists go through, but I do. Because of that, I believe I can become an executive, also if I learn more about the game.

What are your goals? I hope to continue to make good music and to be considered the DJ Premier or Irv Gotti of this generation.