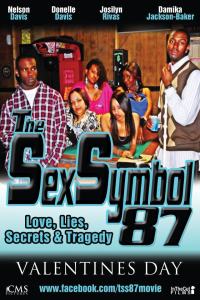 In a city primarily known for its military bases, as opposed to a growing entertainment scene, one ambitious entertainer fought an uphill battle and made history. Always dreaming of being in front of the camera, Nelson Davis purchased a camera of his own and began filming. The final result was TheSexSymbol87, a film put together by Davis, with help from his friends, family, and aspiring entertainers in the area.

While the film was not about hip hop, it was heavily-influenced by hip hop, with the protagonist, Jimarcus, played by Davis, working as a marketing executive for a major record label. Jimarcus, along with his best friend, DeShawn, played by Donelle Davis,Â have made incredible lives for themselves, at a young age. The film served as an outlet for several artists on the Jacksonville, North Carolina hip hop scene.

TheSexSymbol87 is the definition of an independent film. Without many props, Nelson Davis and company made the most out of what they had. For many, it was obvious it was their first time acting, but this is easily overlooked with the passion delivered from each character and the addicting storyline. For a city, which has been overlooked by many others, within its own state, the film is something everyone can take pride in.

There are many who often talk about doing what Nelson Davis did. In small cities, it is usually difficult to put something as big, such as a film together, without conflicts arising. This was not the case, as Nelson Davis simply worked until the product was finally ready to be released. He did not hide behind his film being “independent,” either. Everything from the packaging of the DVD, to the red carpet at the film premiere party was up-to-par.

From looking at how both the premiere party and the DVD cover, one would have difficulty telling if Nelson Davis was completely independent, or had a financial backer. One thing is for sure, however, TheSexSymbol87 lives up to its tagline, “Love, Lies, Secrets, & Tragedy.” Most independent films have strong storylines, but are typically predictable. Another area in which TheSexSymbol87 stands out is in surprising everyone in the final stages, where the entire dynamics of the film change and then leaves you with a cliffhanger.

Within itself, TheSexSymbol87 is a classic, after looking at how the film was presented, and then the actual contents of it. However, on a bigger scale, the film is a major step in the right direction for a city with a budding entertainment scene. More than likely, TheSexSymbol87 will be the first of many films produced in the city of Jacksonville, North Carolina.