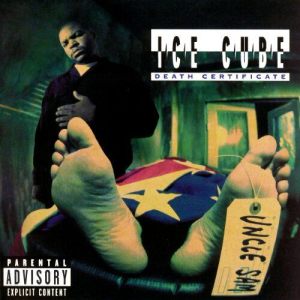 Twenty years ago, not many could have pictured Ice Cube as the executive producer of a popular family sitcom. While Ice Cube is probably better-known for his movies, he emerged into the game as one of the most-violent rappers ever. His former group, NWA, is one of the primary reasons explicit albums come with a “parental advisory” stamp.

Following his solo debut, AmeriKKKa’s Most Wanted, Ice Cube returned to the studio with his more-controversial album, Death Ceterficate. On the album, Ice Cube refocused his beef with NWA to manager, Jerry Heller. He urges his former friend, Eazy-E, to kill him on the disc.

Fatherhood and new business ventures have calmed Ice Cube down, making him now a favorite with parents. However, during an interview with XXL, Ice Cube reflected on his hardcore days. Ice Cube candidly discussed several topics regarding an album considered one of the best all-time by critics.

Death Certificate came with two sides, “The Death Side” and “The Life Side” and Ice Cube explained how the album came together. Ice Cube revealed there were a number of tracks he could not decide which side to put them on. The album was a mix of intellectual songs and songs made solely for the streets. Speaking on his album, Ice Cube mentioned how he avoided the sophomore jinx most artists deal with when trying to follow-up their first album. Due to the tone of his album, fans flocked to Cube’s second album, more than the first.

Ice Cube said Death Certificate was an album that needed to be created. The album was recorded while Ice Cube was going through a personal transition, as he was learning knowledge of self. As Ice Cube was learning more about the true history of the United States, he wanted to craft a record in which he exposed this to his audience. While Ice Cube’s goal was to craft an album for the streets, he added a little intellect because without it, the people would not expand.

In back-to-back years, Ice Cube had released Straight Outta Compton, AmeriKKa’s Most Wanted, and the Kill at Will EP, when asked how he felt going into Death Certificate, Ice Cube said he felt energized. At the time, Ice Cube felt as if he was in his prime. XXL commended the rapper on his run, releasing several classics in the early stages of his career. Having so much music out, according to Ice Cube, made the people more eager to hear music from him, which helped bolster his record sales.

Many expected Death Certificate to feature production from The Bomb Squad, as Ice Cube’s previous album did. When asked about this, Ice Cube said the production team was facing turmoil. Despite his producers having problems, Ice Cube had a record to put out, so he decided to craft his album without them. After parting ways with The Bomb Squad, Kill at Will was also successful, as Ice Cube worked with Jinx. Their success led Ice Cube to the realization that they did not need anyone aside from themselves.

Despite the hard feelings involved with the NWA breakup, Ice Cube refrained from dissing his former crew on his debut album. But, after they dissed him on the successful album, Niggaz4life, Ice Cube decided to go after his former partners. The result of this decision was his infamous diss track, “No Vaseline.” Ice Cube said the lyrics had already been laid, but he personally sought after the beat. Using Dazz Band’s “Brick” beat, Ice Cube went after his former crew.

Ice Cube also gave his take on gang life across the United States, as he spoke on his “Summer Vacation” track. The Compton rapper said he, along with his NWA mates would often be stopped at airports, when they did long-distance shows. Being stopped had nothing to do with their music, just based on them looking like drug dealers. Black men from Los Angeles had been going across the United States selling drugs, which Ice Cube said led to Crips and Bloods rising up in other areas, not the movies and pop culture.

During the promotion of Death Certificate, Ice Cube ruffled many feathers, as he insulted the Jews with a Jerry Heller diss. Ice Cube also got into an altercation on CNN over Jerry Heller. The Rabbi from the Simon Wiesenthal Center confronted him on a phone call with CNN about his disses. Defending himself, Ice Cube asked the Rabbi if he condoned the way Jerry Heller handled him, which led to Ice Cube’s series of disses. It was after Ice Cube’s comments when the Rabbi hung up and the mediator declared the interview over.