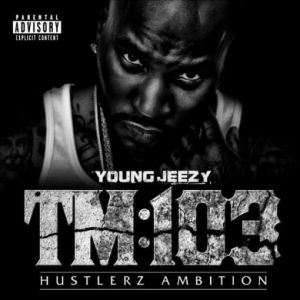 The past three years have proven to be hard for Young Jeezy. When he last released an album, Jeezy had the full support of Def Jam. However, Def Jam went through a series of changes, as did Young Jeezy. From 2008 until 2011, the hip hop landscape has changed entirely and Young Jeezy currently finds himself exchanging disses with Rick Ross, a former friend, and Def Jam label-mate.

Following several changes with his release date, Young Jeezy secured the December 20 release date for Thug Motivation 103 and he did not disappoint. On his fourth effort, Young Jeezy manages to silence his critics. For years, Young Jeezy has always appealed to the “trappers,” but many overall rap fans did not like his music. Perhaps realizing this, Jeezy crafted an album that has something for everyone.

For those who wanted the typical Young Jeezy, he delivered this on such tracks as “What I Do” and “F.A.M.E.,” with T.I. However, Young Jeezy was able to move into a different lane with his “I Do” track, with Jay-Z and Andre 3000, holding his own against the renowed lyricists. Revisiting his rap-R&B style, Young Jeezy teamed up with Jill Scott for the introspective “Trapped,” helping to expand his versatility. On Thug Motivation 103: Hustlerz Ambition, Young Jeezy continues to tell his street stories over some of the best beats of 2011, delivering one of the best albums of the year.

Now a six-year veteran in the rap game, Young Jeezy has finally delivered an undeniable classic album. With this album, Young Jeezy succeeded in giving every type of hip hop fan at least one track they can enjoy. Along the way, Young Jeezy delivered many of the best collaborations of the year, even snagging a hook from Eminem. Thug Motivation 103 has the most-unique mixture of artists seen on an album in years. Despite the guest verses from Fabolous, Jadakiss, Future, 2 Chainz, T.I., Jay-Z, Andre 3000, Snoop Dogg, Trick Daddy, and others, Young Jeezy is not outshined on the album. Instead, he rises to the occasion, providing one of the best albums of 2011.