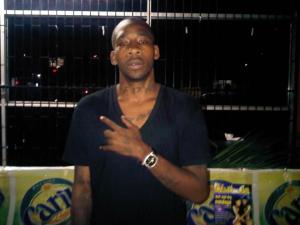 While his name may not stick out like many others, Bang ‘Em Smurf has been one of the most-vital members of the hip hop community for well over a decade. Bang ‘Em Smurf has been a part of many hip hop movements, most-recently Maybach Music, and is also the CEO of Feed Da Wolves, with Domination. Over the years, the faces and names around him have changed, but the mission has remained the same.

Following Black Listed, what is your next project? My next project is my solo album. Right now, I’m working with my artist from Trinidad, Primo Sparx. I am focused on that and I am also working on Maybach Dice’s God’s Plan, coming out in January.. We are looking to drop Primo Sparx’ project on December 24. My Black Listed project will be out in February. I have already recorded the first song off my solo album, so I am all over the place.

How does it feel to have overcome adversity to now be a part of the hottest label in the game? That is a blessing and to be doing that all the way from Trinidad, it is a blessing. Everything is written in life, so it was bound to happen. I just had to wait for my time and then it all came together.

What moves do you feel are essential to the growth of Feed Da Wolves? Consistency. We have to keep grinding, that is the key to growth in any business. We have to stay in the headlines, work hard, make great music. Regardless of the haters, good music cannot be denied. At the end of the day, people respect my music, because they know how real it is. My life serves as the motivation for others.

What is it like to have been a part of two of the biggest hip hop movements of the past decade? At the end of the day, you live and you learn. My time at G-Unit is a learning experience and I have no problems with 50 Cent. It is a blessing to have been a part of G-Unit and a co-founder of the movement. I learned a lot being around 50 Cent, Eminem, Dr. Dre, and Jimmy Iovine. I learned a lot, no love lost. It was a blessing to be a part of the biggest movement in hip hop history.

Now, to be a part of Maybach Music, it is a blessing. When I think about everything going on, I say ‘thank God.’

How do you feel about your Feed Da Wolves movement, so far? Oh man, I could not be happier. Feed Da Wolves started all the way in Trinidad, so the global success had made me proud. From going to jail, getting deported, and now having all of this, I thank God, because I went through a lot. Also, free my brother Domination. Domination was the front line, so now Dice and myself have to step up. In this business, a lot of dudes cannot bounce back, but I did.

How is Domination doing? Domination is in the island, he has to go trial, but we are praying for the best, while preparing for the worst. At the end of the day, we have to keep things going for him, he just had a baby girl too. Domination is doing well.

Aside from Maybach Dice and Domination, who are some other Feed Da Wolves artists to look out for? Primo Sparx, he’s from Trinidad. He spits like he has never even been up top. I am feeling real good about his project. With him, we are going to open up the Trinidad market. Primo Sparx is a beast. South Taw Don, he is holding it down for us in Florida.

Can you tell us how you linked up with Rick Ross? Me and Rick Ross linked up during the time he was beefing with 50 Cent, shout out to Masspike Miles. He linked us up, we talked in Trinidad and we teamed up. Ross is a real nigga, so salute to him. That was early 2009. He even featured me on his album, Deeper Than Rap. Rick Ross is my conrad for life.

MC Hammer owes $779,000 in Back Taxes to the Government
Drake’s Biggest Fan [PHOTO]