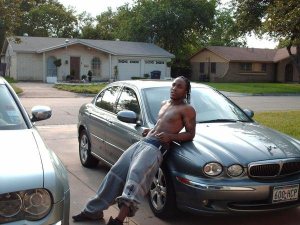 For years, hip hop fans have welcomed the likes of the Geto Boyz, UGK, and other Texas rappers into their cars, CD players, and most-recently, computers and iPods. Six years ago, the Houston hip hop scene took over the game. The hip hop world was introduced to Mike Jones, Slim Thug, Paul Wall, Chamillionaire, and Swisha House Records.

While each of these rappers had their run on top of the game, by 2008, they were no longer the focal point of the game. Despite this, Texas hip hop has continued to grow, over the past six years. Other areas in Texas are still rising, including the Dallas-Fort Worth area.

Rayski Baby is among the emerging talent from this area. Signed to Silent B Entertainment and Global Respect, Rayski is preparing his own takeover of the game. Through his connections, Rayski Baby said the Silent B/Global Respect movement will soon be running the hip hop world. Hoping to make hits, Rayski Baby is ready to deliver his first major project to the world, Rayski’s World. The emerging rapper discussed this and much more during his interview with Hip Hop Vibe.

What feeling do you get when you think about how big your career can be? Sky is the limit, I think about it almost everyday. I feel with my talent my team and with the right people behind me I can blow up and shock the world. Right now Silent B/GR we all we got and we making a hell of a move just doing us. I joke and told my team I’ll take a singles deal just to show them how it’s done ’causeÂ I feel once I’m in the door “IM IN THE DOOR.” But, they gone have to hop on us soon, ’cause later they gone have to come way correct, CAUSE SB/GR IS ON THE RISE!!!!! SO A&R’s where you at? We ready for the deal!!!!!!

Is that was serves as your inspiration? YES! Can’t wait to show the world who RAYSKI BABY is, can’t wait to show the world who SB/GR is, period. I want to broaden my fan base. Just the thought of me not knowing who might be listening to my music inspires me, all the loveÂ I get from friends family and strangers is amazing. It definitely is a blessing when you have people that are behind you and believe in you and what you are doing. So,Â I say shine with meÂ or get your lights cut off (laughs).

How long have you been rapping, seriously? To be honest,Â I just started rapping seriously seriously. Before that,Â I would just rap and freestyle with friends and family. Until, one day,Â I was listing to the radio and said to myself “if they can make it i can make it.” I got the talent, the looks, the swagger, the attitude, and the background to go with it if thats what they looking for and I’m not saying that to diss anyone, butÂ I feel everybody should have that attitude that I’m just as good,Â or even better than the next, but also be humble and respectful, as well, ’cause at the end of the day, you can’t hate on a person that is living out their dreams.

When did you sign with Silent B Entertainment? I can’t remember exactly what the date was, butÂ I can say it was one of the best days of my life, meaning thats the dayÂ I became a BOSS (co-owner) in something thatÂ I really enjoy doing and thats this rap shit. Matter of fact,Â I think my mother and grandmother put it all together. My mother was on the phone with my grandmother and she was telling her howÂ I rap and how good it sounded. My grandmother was like, Branden (my uncle) was getting off into the music business and wanted to start a label, soÂ I let him hear some of my music at the time and we went from there. SILENT B. ENTERTAINMENT.

So far, how many projects have you released? Well RAYSKI’S WORLD will be my first BIG project. The first projectÂ I just took my time on and put together to show people how im really coming. It is too nice, full of singles, full of hits, andÂ I did that on purpose (laughs).Â I think people haveÂ been waiting to see how I’m coming, so I’m going to come hard with an edge.

Can you tell us about your next project? Next, but not least, allÂ I can say is my next project isÂ going to be even bigger and better,Â I promise every timeÂ I get on that microphone,Â I get better andÂ I create something totally different. I thank GOD for this talent he blessed me with, butÂ I know for sure we want to hit you all with a compilation album introducing the whole team and that’s going to be “fire” ’cause we all got talent, but we all different, so just be on the lookout.

Explain the relationship between you and label-mate, Da Deputy? That’s family right there, we areÂ like brothers. Awhile back, me, him, and my bro Lavish, were supposed to drop a mixtape titled 3 out of 3, which never dropped, due to a couple of situations at the time. But, later we hooked back up and haveÂ been doing music ever since. Like Ne-Yo said, I’m a movement by myself, but together we are aÂ hell of a force to be messed with. SB/GR

How do you feel about the current state of hip hop? AsÂ I said in one of my raps, ‘They say hip hop dead, I say hell no, SILENT B/GR we ’bout to RUN THE GLOBE!!!!’ I can’t really say to much else about it, it is what it is. That is a touchy subject right there, IÂ don’t want to offend anybody, or hurt feelings (laughs).

What type of impression do you intend to leave on the game? I feel I’m that dude,Â I might not be the most-lyrical, but that is not me, that’s not my goal ifÂ I wanted to go that route, I’m sureÂ I could but that’s not my style. My style is more of realistic, IÂ tell you how it is, RAW with a mixture of lyrical metaphors that Louisiana/Texas shit (laughs) maybe ’causeÂ I was born in Louisiana and then spent half my life in Texas. I’m just that dude that makes “HITS” and soon the world will know!!!!!