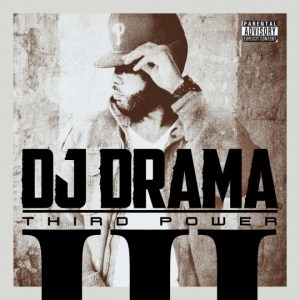 With DJs helming albums, it is difficult to judge the albums based on the lead artist, as there is not one. After being away from the game, for a little while, DJ Drama returned here in the fall of 2011. His Third Power album boasts several collaborations.

DJ Drama does stay true to the art-form of DJ-ing, as his album does provide outlets for rising artists. Unlike other DJ-helmed albums, Drama does work with artists still fighting for position in the game. While his album does boast verses from Fabolous and Akon, there are many new names on the album too.

Staying true to his Philadelphia roots, DJ Drama recruits the emerging Meek Mill, along with Roc-A-Fella’s former acts, Young Chris and Freeway, for the “Lay Low” single. DJ Drama still paid homage to his current home of Atlanta, as well, giving Gucci Mane, and newcomer Future, their own tracks on the album. Both tracks have been extremely popular online.

While Third Power will not be rated as far as lyrics go, the album is full of memorable tracks from the artists who have yet to fully break into the game. There are not many other actual albums that will boast B.o.B., Vado, Big Sean, Wale, Roscoe Dash, Freddie Gibbs, Red Cafe, 2 Chainz, and French Montana. But, through his Third Power album, DJ Drama was able to do this.