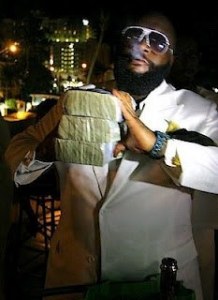 Rick Ross surprised many of his hip hop mogul friends, when he decided to establish a deal with Warner Bros. Records. Jay-Z helped Rick Ross get signed to Def Jam. Birdman has been a frequent collaborator. Diddy has taken Ross under his wing in recent years.

Last year, Rick Ross’ stock rose very high. Many feel he was the top rapper, aside from Eminem in 2010. His spike in popularity came at the right time, as he was a free agent. The people who helped him out were all hoping to sign him. Each of the men felt they would land the big Maybach deal.

Ross said the deal was a long time coming. He has been watching the way Warner Bros. treats hip hop artists and he likes the way they do business. When they offered to give Maybach Music a secure home, Ross quickly jumped at the opportunity to sign with them. Now, Rick Ross said he and the rest of his crew will be in the studio. They are hard at work, creating more hit records, this time it will be for Warner Bros., instead of Def Jam.