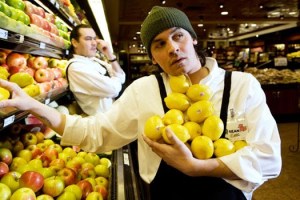 Atmosphere is a 2 man rap group from Minneapolis, Minnesota. Formed in 1993 as a 3 man group, frontman MC Slug, MC Spawn, and DJ Ant, Spawn left in 1997 after their first LP release, “Overcast.” Now running as a 2 piece group, Slug can blow you away with deep ass tracks one minute and hilarity in the next.

Atmosphere has released 6 full length LP’s and countless EP’s, which are often available as free online downloads. Atmosphere’s LP’s include their debut album Overcast(1997), Lucy Ford(2001), God Loves Ugly(2002), Seven’s Travels(2003), You Can’t Imagine How Much Fun We’re Having(2005), and When Life Gives You Lemons, You Paint That Shit Gold(2008). Atmosphere records under the independent hip hop label Rhymesayers, which they helped co-create. Many other talented artists come from the Rhymesayers label.

Atmosphere is one of the most successful underground/indie hip hop groups around, because they tour nonstop. I had the privilege of seeing them perform last year at the National in Richmond, Va, and they were absolutely incredible. They have had many years to practice–they spend countless months of the year touring the country performing at venues all over the US.

Slug is not a white MC trying to be Eminem–his rhyming style is nothing close to Em. He loves to use deep metaphors to represent a myriad of topics, but most frequent are alcohol and drug abuse, and number one, women.

Slug has also made 3 albums as a side project with the rapper Murs, under which they call themselves Felt. Those 3 albums are jokingly titled “Tribute to….” and a female celebrity’s name, but there is no relevance to that within the actual album. It is not believed that they are mocking the celebrities, but rather just a silly random pick a name out of a hat kind of album titling. The three albums are Felt: A Tribute to Christina Ricci(2002), Felt 2: A Tribute to Lisa Bonet(2005), and Felt 3: A Tribute to Rosie Perez(2009). Currently they are at work on their 4th, currently titled Felt 4: A Tribute to Heidi Fleiss.

One of my favorite lines from an Atmosphere track comes from the album title track “God Loves Ugly.” “If it’s all about gettin down with the get down/how long I gotta wait for these fools to sit down?” Slug isn’t bragadocious like most MC’s in current hip hop, but that’s kinda the point here. He loves good quality hip hop, and doesn’t have much patience for the negative direction much of hip hop has gone in. And he’s definitely not willing to compromise what Atmosphere is, ever. It’s a large reason why he has mostly tried to keep Atmosphere underground, though their talent has led them to more recently getting attention from the mainstream.

I could talk for days on what makes Atmosphere so hot, but really you just gotta go check them out for yourself. You really can’t go wrong with any of the albums, but top 2 in my book have to be “God Loves Ugly” and “When Life Gives You Lemons, You Paint That Shit Gold.” Atmosphere IS what hip hop should be all about–not trying to be a fake thug, not trying to send bad messages out to the world. Just looking to share some messages, both serious and comical, trying to have fun and live life through great hip hop. Atmosphere bleeds hip hop–do yourself a favor and go enjoy.

Best Tracks: “God Loves Ugly” “The Woman With The Tattooed Hands” “Say Hey There” F**k You Lucy” “Shoes” “Trying to Find A Balance.”